If you do not expire the layout being modified, some exceptions may cause the splash screen to appear

As the title suggests, if you do not expire the modified layout, internally, some exceptions are caught and a splash screen is displayed.

(1)
The triggering method is “ScheduleManager - LoadNewSchedule” which does not check the validity of the currently playing layout.

(2)
The root cause is that the SetRequiredFiles method in the RequiredFiles class deletes the modified layout as a “Delete the old file as it is wrong” in the process of creating the download list (From RequiredFiles.xml).

(3)
As a result , a blank period where xlf does not exist for the modified layout is happen.

The point is：
If the following three conditions (①, ②, ③) are met, this topic’s event will occur.

Because the above (1) makes a layout that doesn’t have xlf valid, the player tries to find it, but the file doesn’t exist.
This results in two exceptions ((a) and (b)):.

I think that some users like me, who use a layout that changes dynamically, turn off the expiration setting in order to avoid the interruption of the running layout (new stuff pops up when the download is complete).

1.8 Changes made to layout, screen shows splash screen for a long time Get Help

I have made a slight change to a module on a display, and after 10 minutes or so the screen reverted to the Xibo splash screen for around 30 minutes. It then showed the display for 5 mins and is again showing the splash screen. Is there anyway to avoid this? Can the player display the last layout until it has downloaded the changes? Thanks, Catriona

I avoid this by “Do not delete and overwrite xlf so it does not create a blank period”.
The work is simple: if you have xlf in SetRequiredFiles (), it won’t delete it even if it changes. 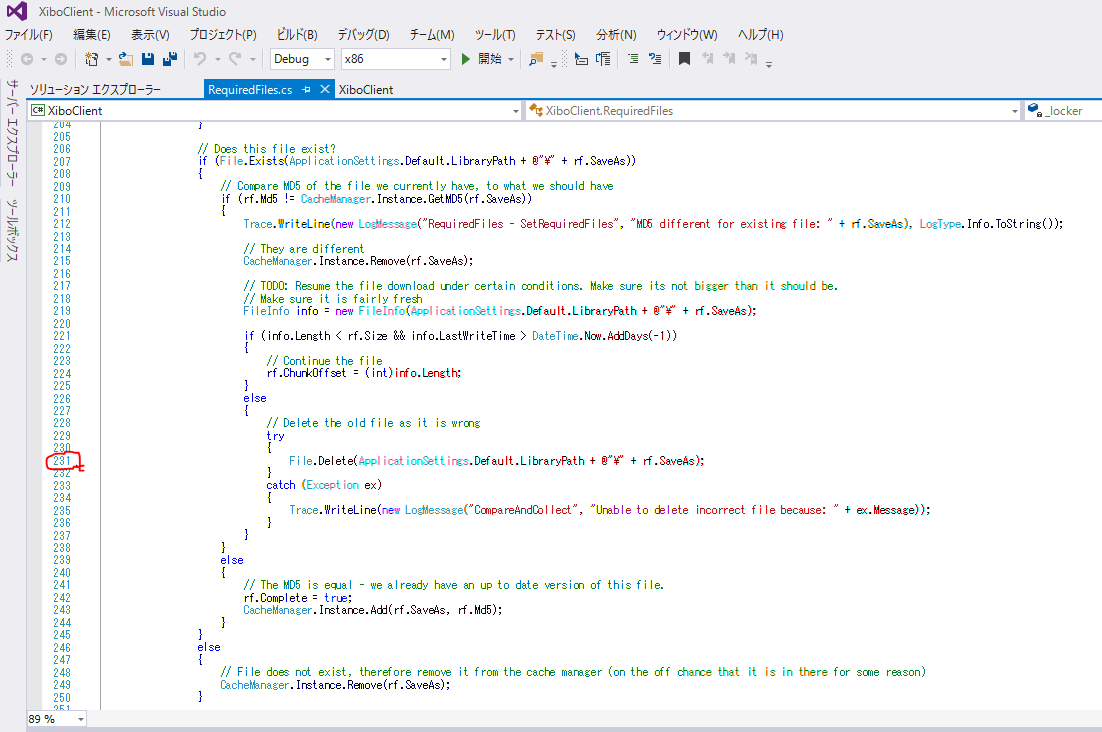 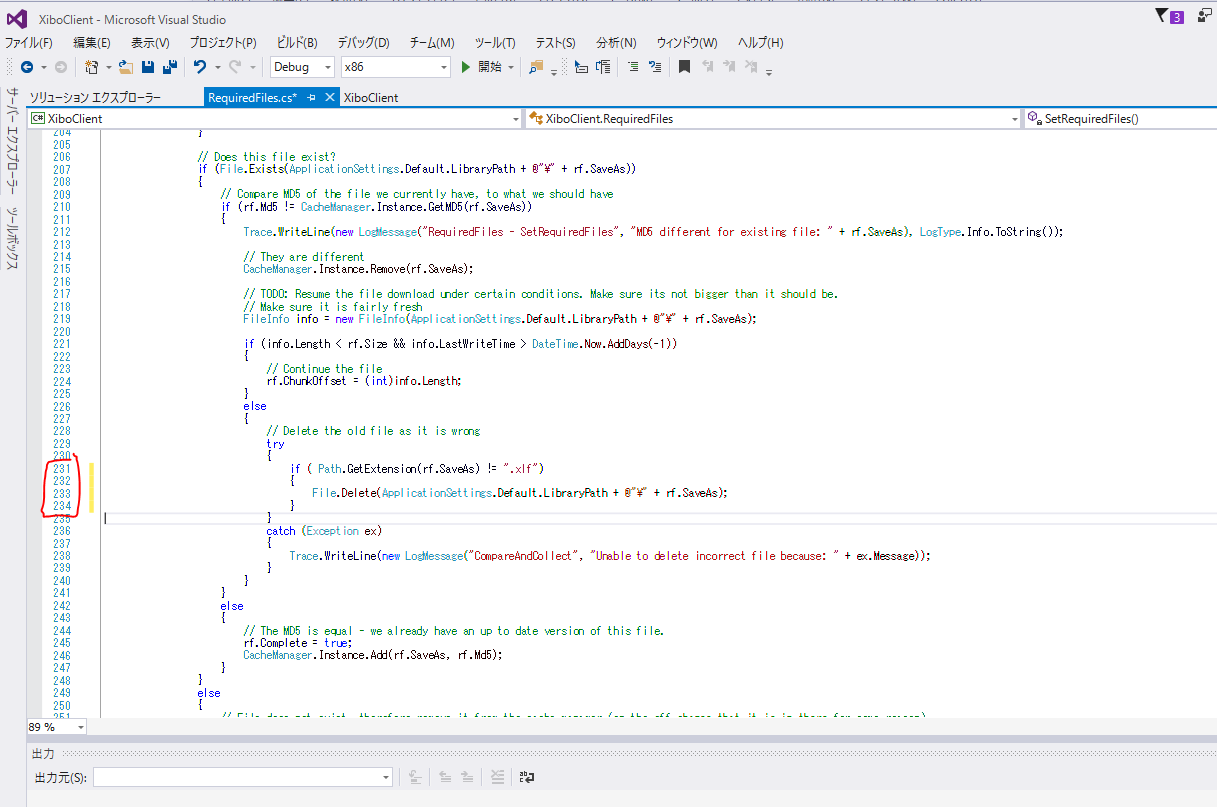 Because xlf always loads dependencies first, playing a new xlf will not cause an error.

The only concern is that old xlf dependencies will be out of control and will be removed by the libraryAgent.
However, by default, there is a 2-day grace period for removal, during which time the new xlf dependencies should have been downloaded.

In some cases, the [player v 254.1] option "ExpireModifiedLayouts" does the same thing as true Xibo Player for Windows

will be
because the following if statement is always false:.

As a result, in our case (v 254.1),
Instead of a splash screen caused by an invalid layout being incorrectly treated as valid,
As a result, the default layout is displayed.

I think it is implied in our documentation and past topics that when a Layout gets modified, existing Players will stop playing the old version of that Layout. The “expire modified layouts” setting just controls whether or not a Layout already playing is allowed to play out, or if its changed immediately. Therefore the test in ScheduleManager which isn’t working (thanks - fixed that) is intended to make sure that if the Layout is being currently shown, then it remains on screen until it is finished.

With the modification you propose, it would mean that the Layout would continue to play in its old format, until the new Layout could be downloaded. This would be a breaking change in the logic, because some users rely on being able to effectively guarantee that the old Layout won’t be shown (which is why we delete it).

Does that make sense?

Edit: I should add that i’d expect the default layout to be played in that situation - not the splash screen.

I understand well.
There are some people who need to discard old layouts immediately.
I see.

About what is written in Edit: …
I agree that in the case I presented (Errors that cause non-existent layouts to be executed), the default layout is better than the splash screen.
I would appreciate it if you could consider it.

Thank you for your continued support.

I agree that in the case I presented (Errors that cause non-existent layouts to be executed), the default layout is better than the splash screen.
I would appreciate it if you could consider it.

I think this might also be solved in R255, but I am not sure. Would you be able to try it and see?

Hi, Dan.
Sorry for my late reply.
I don’t have a working test of this yet, but I looked at the source directly.
I am referring to the following processing within ChangeToNextLayout () in MainWindow.xaml.cs:.

In the case of else, the only option is to have a splash screen, so in that case I wish I had a default layout instead.

My explanation seems to be insufficient, so let me add a little bit about the problem I have.

・We are using only one layout.
・The current specification assumes that the current layout is unconditionally valid.
・I have also confirmed that this specification will not be a problem unless the current layout has been changed.
・On the other hand, we only use one layout (Layout ID does not change), so that xlf is deleted frequently every time the layout is updated.
（Specifically, the layout changes as the image in the dynamic playlist is updated.）
As a result, there are many cases where “ChangeToNextLayout () Could Not Download Updated Files in Time”.
Therefore, it is often the case that “Splash screen appears when a reference to xlf in the current layout occurs”.

This is the specific problem we have.

That’s why I made a proposal like the one in the previous post.
・Overwrite xlf instead of deleting it.
・If you’re going to get a splash screen anyway, set it to the default layout.