Usercontent isn't shared with it's group!?

I have a problem (most likely since v3.0.1, the first v3 which I installed) when a user uploads/creates/adds stuff (media files, layouts, playlists, widgets), that all of this isn’t shared with it’s user group.

In CMS v2 I have the settings so that when a user does something new (uploads media files, creates a layout, adds a widget…) it will be shared with it’s group with all three rights (show, edit, delete). After I upgrade to v3 I updated the, now more detailed, rights management but maybe I have forgotten something or doesn’t understand everything right (or it’s a bug)? Anyhow, now when a user does something it isn’t shared with its group at all!? 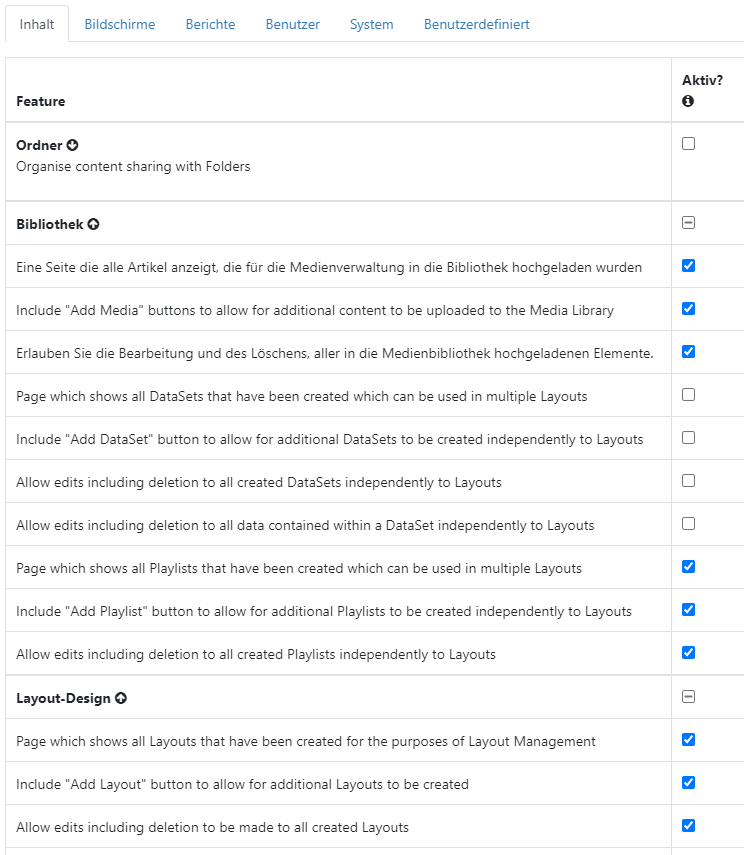 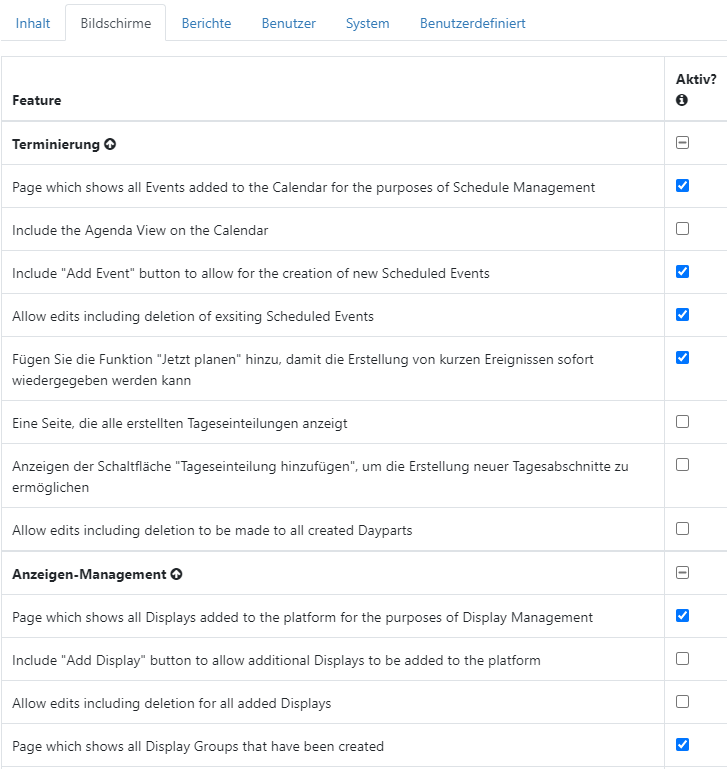 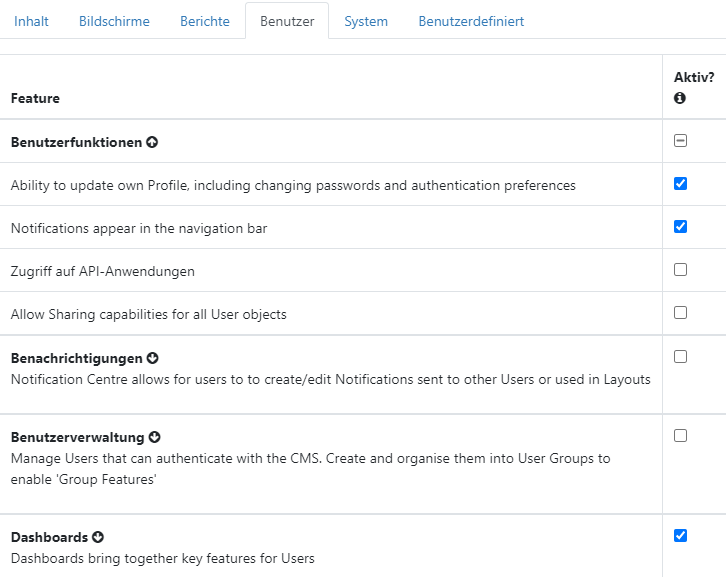 Benutzer726×577 13.6 KB
I tried the “Allow Sharing capabilities for all User objects” too, which I don’t know what it really does, but it doesn’t change it, as far as a quick test shows.

Does anyone know what I have to do to repair this and get the v2 behavior back that a user content is automatically shared with it’s group? Now I have to add the user group rights as admin every time a user add something new.

Hi, Features control access to areas of the CMS whilst Sharing controls the level of interaction (View,Edit.Delete) with user objects. So any user content would need to have the appropriate View,Edit,Delete settings for User/User Groups for them to be able to interact with it.

You could create a Folder for each User Group and assign Share options to the Folder instead. Then when you save/move objects into the Folder they will inherit the View,Edit,Delete options set for the Folder. Please note that if you saved a Layout, for example, to a Folder, you would also have to save/move any media assigned to that Layout in the same Folder so that Users/User Groups could access it fully.

The “Allow Sharing capabilities for all User objects” gives the User/User Group access to the View,Edit,Delete settings so that they can set those on objects.

I hope that is some help!

I understand most of it before and the feature control is now more clear to me. Thanks!

BUT something has definitely changed somewhere between 2.x and 3.0.8 (I would think in the first v3) or the update process(es) changed some settings which I now don’t find to get the previous behavior back!? I “know” it because I haven’t changed anything (on purpose at least) besides updating nearly every time a new version comes out. Except with the first v3 I installed, back then I changed all the group features stuff because it changed a lot and don’t set itself up the way it was in v2. (And maybe in that process I changed something else I shouldn’t?)

I try to better explain my v2 behavior I want back, maybe it wasn’t clear in the first place.

In v2 when a user (from type “User”), which was part of a user group, adds some content (uploads media, creates a layout or playlist, adds a widget in a playlist…) all these contents were AUTOMATICALLY shared with its group(s) with all three rights set (View,Edit,Delete).
Like:

In this case all other users (from type “User”), which are in the same group, can use/delete… these contents.

and all the other users (in the same group) can’t use it.

To make it clear, in v2 I definitely don’t use “Group Admin” Users and it works as I described. So I doubt the fact: “Users only have access to their own Media, Layouts … This was the same for v2.”

I can reproduce the behavior from v2 when I add all the share options manually with my admin user every time a normal user adds something, but that’s obviously not suitable.

I don’t bet on it but I vaguely remember that there was a setting somewhere which even controls which group share rights from View,Edit,Delete should be set as standard for the user created content (but I can’t find it anymore).

I hope it’s clear now which behavior I want back.

In versions earlier than v2, there was an option to provide a default setting for all newly created objects, however from v3 this has been replaced with Folders. So you would need to create a Folder for that group and set the sharing access to the folder, which means that everything created by the group saved in that folder will inherit the options applied to it automatically.

Thanks for the clarification!

I try this solution and your suggestion with group admins and see what works best.