I tried 1.8-R6 version on both Ubuntu 20.04.1 & ubuntu-18.04.5 different players installed with Snap CMS Version 2.3.8. The Problem i created a layout with one mp4 video when i try to schedule on the Players both Player play the video for about 1 or 2 sec. the the video Freeze and the Players hangs.

i tried many time installing and reinstalling the client but ended up with nothing i also tried to change the CMS server HW. i’m getting the same problrm.

Finally i follow @dan Guide to test with AppImage packaging option. i ended up with the same Issue. i can’t Play videos on Players.

Does anyone know if there is currently a problem with the video playback in the ubuntu player?

Thank you for your message Hani and sorry to hear about your issue. Can you confirm if you are seeing any errors being reported by the player when the video hangs? I also wondered if you can provide an exported copy of the layout in a private message to me? I can then test this on my own player (running on Ubuntu 18.04.5, player version 1.8 R6) and see if the performance is the same.

Thanks for providing a copy of your layout. I have been testing this on my Xibo for Linux 1.8 R6 (code 108) players running on Ubuntu 18.04.5 and 20.04.1. So far the videos are playing without issue. You can see my screenshot is from my ubuntu 20 machine but Ubuntu 18 is performing the same: 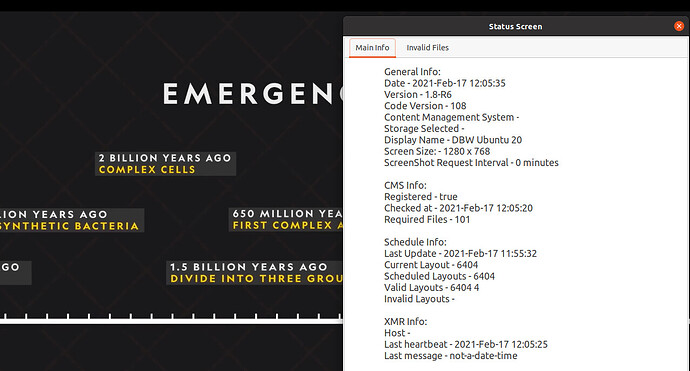 Can you confirm what version of Xibo for Linux you have installed? Can you try the following steps and let me know if the issue persists:

Once you have followed the above steps, please schedule the player again and let me know if the issue persists.

Thank you very much for your prompt replay. actually i tried all what you mentioned with no Luck.
i just figured out the root cause JUST NOW it is the nvidia driver after installing the Proper driver it is working fine now. i’m really shy

thank you very much for your valuable support
Regards,
Hani

Thanks for confirming that the issue was in fact driver related, I must admit that was what I expected could be the issue once I saw the layout running on my player, but best to troubleshoot these things step by step. Either way this is great news, glad you’re back up and running again!

Hopefully you will not encounter any more issues and you can use your Xibo signage without any further obstacles.

Hi Dan,
Thanks again for your support and i wonder if you stop supporting flash Files. Please confirm as the Player is unable to Play swf Files.

Flash is not supported on the Xibo for Linux player, and due to flash now being end of life it is extremely unlikely that support will be added in a later release. If you require swf files to be used in your signage, you will need to use the Windows, webOS or Tizen players.

Hi Dan,
Hope this finds you well and i am sorry for being demanding. i facing a critical Problem regarding to uploading a layout contains 4 videos. it is little bit large size layout. the Player get into the splash screen for a couple of minutes and start downloading the layout content then it transfer to No Layout blue screen. after investigating the Problem i found that when i open manage screen page the Player keep grabbing the video files and never stop the downloaded files size exceeds the original file size. and i have a notification that " Display is downloading 2 files too many times" i am running cms 2.8.3 Manual Installation Not Docker and Player is ubuntu and Mint ver 20.04.

but no luck. i wonder if you could help regarding to this error. below some screen shots that may help you to investigate the Problem